Anna was born in UK in 1962. She is married with two adult sons, who are both married. During the latter part of 2019 one daughter- in-law was diagnosed with cancer and the other delivered Anna’s first grandchild.

Anna’s passions are all centred around meeting the needs of her family and friends. She accepts the role of matriarch and carries all the responsibilities that go with this role.

Anna at 58 was beginning to ‘feel her age’ more, including being less mobile and experiencing more aches and pains. She was initially motivated to live a healthier lifestyle by the realisation that ill health can affect people of any age. She enrolled in a group eating plan and successfully lost 12kg.

Anna explained that she was always the chunky one in her circle of friends, and that her Italian heritage meant food was not to be wasted. She has tried many different eating plans and programs to be leaner and fitter, all of which work for a while. Then she often finds herself back where she started. She feels she lacks willpower and discipline to maintain any eating or fitness changes.

Anna's Mindsonar:
Anna used a Mindsonar profile to explore her motivation and her thinking style around “eating and exercising for a healthier lifestyle”.

Anna spent much of her time talking about her family, family life and her role within the family. She feels that her role as matriarch of the family means she must be there for everyone, all the time, leaving little time to herself. She both enjoys this role and resents it at times.

She mentioned her parents had known food scarcity and that food was never to be wasted or taken for granted. The Italian tradition of feeding the family together is something she aligns herself with and is proud of. She enjoys feeding people food that makes them feel happy.

Anna also mentioned that she likes to know she is doing well when she engages in eating plans. She has joined face-to-face weight loss groups, where she enjoyed being a ‘good member’ and seeing the scales /record card results gave her a sense of achievement. Being with the other members and giving and getting support from them was all part of the group enjoyment for her.

She wants to lead by example and prove that she is committed to living a long and healthy life, to seeing her grandchild and future grandchildren grow up, and more importantly, playing an active part in their lives. This links in with her senior family member role and that of an influencer in the family.

Her wish to be looking and feeling right, good, doing things correctly, along with her seeking external validation from others as to how well she is doing in her weight management. She sees her eating and exercise as a small part of the bigger picture or her role in the family. She has responded to her daughter-in-law’s ill health with a renewed desire for change, albeit in gradual steps to keep the family harmony undisturbed during this stressful time.

Matching  - Anna is reflective and applied with the Matching metaprogram; this is supported by her thinking about the many things she could do if her eating and exercise routines were aligned to her living a healthier lifestyle. She wishes to play a long and active part in her grandchild’s life for example. She can imagine the days out and the things they will do together and does talk happily about them. She talks about how well she supports her family, her friends and how they are her purpose. Being a good wife and mother, and now grandma really matters to her.

External Ref  - Anna is conscious about how she looks and mentioned that her place in her circle of friends is at the back ‘I’m the chunky friend that walks in behind the others’ and other such comments. She mentioned that exercise classes made her feel uncomfortable, her feelings of tight clothing, and of being sweaty were all issues for her. What other people see, how they might react, what they may say, all matter to her. She is conscious that what she eats or how much she eats might also be judged or watched by others.

General  - Anna used lots of ‘should and must’ statements whilst talking about eating and exercise. She focusses these on what she has seen or read – aimed at people like her. She will think about lots of these ideas and some she will action; most she will be reluctant to commit to as they will impact on other areas of her life. She will be happy if the things she might chose to do, fit in seamlessly around her existing life. In fact she stated ‘I’d like to eat at a buffet and know when to stop without thinking about it’ and she wanted to learn how to ‘refuse food, but not the sentiment it was offered in – equating with love and comfort.’  In relation to exercise, she wants to ‘do exercise without it being a hurdle:’ just the use of the word hurdle shows she may see exercise as a barrier to be overcome, as opposed to ways to overcome it. When talking about more specific ways Anna might approach her eating and exercise, she had things she wouldn’t or couldn’t do – things that affected the family, her husband etc.

Development - Anna has demonstrated throughout her profile and her conversations with me that whilst she is ready for change, it has to be on her terms and within a timeframe, she can accommodate – causing least disruption to her existing life.  Small changes she accepted could start straightaway, and she wanted to track these and see her results before escalating them. Anna is determined to not stay as she is, this news about her daughter-in-law is pushing her towards change. She feels uncomfortable, and yet is tentative in her steps towards change.

Anna’s post profile session key points
Anna had not considered that by focussing on the good things so strongly, might mean she has been avoiding the things that might happen if she does not make changes. Quite emotional at the thought that even though she knew members of her family had a tendency towards certain medical conditions, she was ignoring them.

Anna also worries that her less healthy lifestyle might be affecting her adult children’s view of her; wondering why she has not kept up the things she has tried already. This bothers her, she does not like feeling that she is failing. [against her Graves Orange and Purple Drives]

She made the decision to spend some time reflecting on this, and even finding out more about what the family history was in relation to health conditions. [Mismatching]

Anna and I explored the idea that she might consider how she might have some of her own ways to validate how she looks and feels; we discussed simple ways that she might try things within her control. Anna made several comments that led me to believe she was uncomfortable with some aspects of using her own standards.  [Internal Ref]

She did concede after resisting for a while that as the main cook in the home, her husband ate what was served and thanked her for it… so planning healthier meals to share with him might not be the issue she felt it might be. She also agreed that she was a great organiser and made sure that things were done in a timely manner around the house and within the family – so a suggestion that she could schedule time to exercise at home using a home based online video was an option, whilst not her preferred style, with support Anna did start to be more responsive to trying things out [Specific]

When asked what her strongest reason for changing her eating and exercise routines – she firmly stated that being around to see her grandchild grow up was at the top of her list. When asked if she could imagine using this as her motivation to change – she surprised herself at the reaction she had – quite emotional and she said it was like the lightbulb went on in her head. [VK along with motivation]

She sounded much more animated and her words were much more positive in relation to making some changes going forwards. She mentioned her husband is behind her all the way, being supportive. She also mentioned family and friends that she knows would support her. [Together -Towards]

Anna wanted to understand how her thinking styles were helping or hindering her wishes to live a healthier lifestyle. She felt that the profile report and subsequent coaching sessions gave her a different perspective on her goal.

Once she had explored her reason why, living a healthier lifestyle was important and how it could fit into her existing lifestyle with some specific changes; she could reframe and accept that a healthier way of eating was not only possible, it could be done without any disruption to her family harmony. She also identified that as a rule, she planned day-to-day commitments; finding time to commit to an exercise routine that did not make her feel uncomfortable or vulnerable to criticism was also possible.

After supporting Anna to take her MindSonar profile, receive the results and take part in two coached sessions I believe she has started to think differently around her wish to live a healthier lifestyle. Whilst she has become familiar with her motivation and the ways she thinks about the issues around eating and exercise; she has not yet had the coaching programme that will help her achieve her goal, by understanding more about what she thinks about and what she avoids thinking about – she is in a positive mindset, ready to create changes congruent with her motivation.

MindSonar Professional Development
Recognising that any personal change such as Anna’s exploration of her eating and exercise mindset will bring up strengths and highlight opportunities for growth.

Her VAK was level across the board, meaning she was open to many metaphors and visual imagery as well as willing to listen and ask questions. VAK might be the last section of the profile – should it be one of the first to be considered when working with a client?

Her Graves drives on numerous occasions reflected in her language and gestures. Seeing her motivation supported in all her initial and post report conversations, was a great illustration of how effective the profiling is in relation to motivation.

Exploring absences or low scores in Graves and metaprograms is something I am aware that is my thinking style coming through, whilst working with the client I am guided by her words and her thinking style – yet matching and mismatching can be a rich learning space in this kind or personal journey.

This client is one of a series of 6 profiles all focussing on the same context – eating and exercise for a healthier life.

Please feel free to message me of you have an interest in using MindSonar in this context. 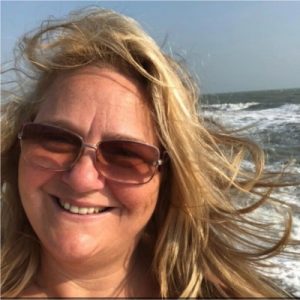 Julia is MindSonar Coach, Life Coach and Hypnotherapist based in Derby UK. Julia says, 'reset and regain your life, stop overthinking your life and start living it now'!