What is the Brexit Mindset? (Updated)

Brexit is everywhere
Here in Europe the Brexit has been in the forefront of our consciousness. Not a day goes by that there isn’t a Brexit article in the newspaper, and often there are two or three. The young and cosmopolitan wanted to stay in the European Union. The old and island-oriented wanted out. It’s a tale of urbanisation, of moderns empires, of generations, of social classes… It has been called a Greek tragedy.

You probably remember how the Brexit advocates were quite surprised when they won. The victors were more confused than the losers. Suddenly they were burdened with a responsibility for what they wanted the UK to go towards, specifically. They had been thinking mostly of where they wanted the UK to move away from. Their ideas about what to move towards were vague (Make the British Empire Great Again!). Nigel Farage of the UKIP was facing an existential crisis, when the only reason for UKIP’s existence, getting out of the EU, was actually achieved. Achieving your goals can be a dangerous thing.

In one sense the Brexit is beautiful
First of all, let me mention a frame that – to my surprise – has been totally absent from the discussion. Here we have an empire, called the European Union, where one of the major provinces – the UK – wants to leave. And there is no hint of war. A huge area leaves the empire by democratic means. Caesar would have sent the legions. Napoleon would have returned from Russia. Hitler would have tripled the Luftwaffe. And all the European leadership did was pout and say it was a challenge for Europe. Isn’t that  beautiful, historically speaking? If I were British, this response alone would be a reason for me to remain in the EU.

Leave and remain mindset
So let’s have a look at the Brexit mindset. What are the values and thinking styles that distinguish ‘remain’ from ‘leave’? Leave said: Britain will do fine on its own, it will gain back its former military force and gain back its position as one of the great world powers. The Empire will rise again. Stay said: Let’s stay in the bigger system, it will provide safety in numbers. Remain said: Britain will be free to manoeuvre without EU regulations, therefore it will prosper economically, negotiating new treaties that are UK oriented rather than EU oriented. Versus: Hello?!? Britain has a 400 billion export to the EU, hampering that will cost us more than any flexibility will gain us. And then there was immigration. Leave says: Leaving the EU will give us back control of our borders. No more Polish workers taking our jobs. No more Syrian refugees taking our housing. Stay says: Even apart from doing the right thing towards the refugees, Brits could lose the freedom to travel, study, live and work in the other 27 EU countries.

What  followed were negotiations with the EU. These are still going on today. They are difficult because May seems to be approaching them – even though she was originally against the Brexit – from the same perspective that started the Brexit. The EU should stop harassing us and give us what we, as a great and successful empire are entitled to. We understand that there are some rules, but rules are for ordinary countries, not for empires like us.

In Graves terms that is an ‘orange’ argument: the really important like us make their own rules. The orange motivational drive is about being the best, about victory and success. It fits very well with the British myth of being a Great Empire. The Northern Irish Republic met with this same attitude when they refused the British ‘backstop’ arrangement (avoiding a hard border). A conservative former minister was quoted saying ‘We simply cannot tolerate the Irish treating us like this. They … really need to know their place’.

If Britain – as a nation – had filled out MindSonar, their criteria would have looked something like this:

Meta criterion: Autonomy versus Being part of

Graves Drives
From these criteria we can project the Graves motivational categories. On the leave side we see success, flexibility and profit. That all sounds very orange, doesn’t it? It’s all about winning. About being the best. ‘We don’t need you guys, we can win this on our own. We are competent and we are confidently facing the competition’. And there’s some red in there too: ‘Who the f**k are you to tell us what to do? We’re boss here’. So the leave side sounds very orange and red. B.t.w. these are both individual motivational drives.

The ‘stay’ criteria are about safety, togetherness and morality. What Graves colours does that bring to mind? Right, blue and green. We ought to help the refugees. It’s the right thing to do. Legally they are entitled to it. We will be rewarded eventually by being part of a powerful group (blue). And we want to be together. Together we’re stronger. Everybody should be heard. Green. Blue and green, are both motivational drives that focus on the group. 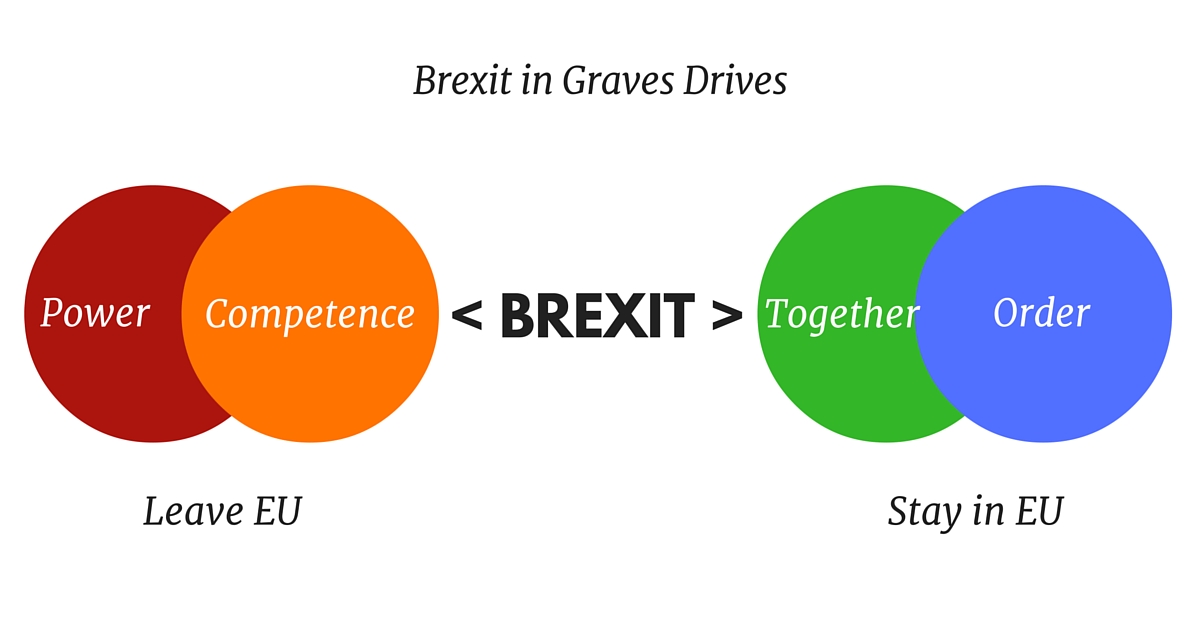 Brexit is a battle between red/orange and blue/green. It’s no great surprise that the leave camp fell apart after the victory. They weren’t that together in the first place. And many of the responses of the winning politicians were quite red: ‘I don’t think he should lead the country, I am much better suited!’

Many stay arguments are away from too: ‘Our economy will suffer’, ‘Our geopolitical position will be weakened’, and so on.

However the type of away from arguments are different. A good example is the ‘close the border’ argument of the leave camp: ‘We’ ll be overrun by thousands upon thousands immigrants and refugees, taking our jobs and eating up our resources’. This is a graphic and specific image. My British friend Graham Dawes explains that the newspapers have played an important role in de Brexit discussion. They are painting a picture – and showing photographs – of hordes of immigrants in Calais, waiting to swarm the UK, sucking the country dry of jobs, health care and housing. They kindled the fears of the British people, using endless repetition. ‘Sensations sells’.

The counterargument of the remain camp: ‘We don’t want to violate the international laws regarding refugees’. This is a very general image, looking quite pale in comparison, no matter how reasonable.

And of course there is the ‘absurd Brussels regulations’ argument, also away from. Like the ban on large vacuum cleaners to force consumers to use less energy. Justifying regulations like these, by the stay camp, is counterintuitive and complex. Mocking these regulations is simple and entertaining. Brexiteers often spice up their arguments with examples like the vacuum cleaner rule.

Specific versus general towards arguments
If we look at the towards arguments we see a mirror image of the away from arguments. The Brexiteers have the advantage of towards arguments around that haven’t happened yet. It is quite doubtful that they will ever happen, but as arguments and images in the public debate they are strong. All these arguments along the lines of ‘Make the Empire Great Again’. Without the EU, the UK will be richer, stronger and more important. No matter how vague and questionable, this sounds good. It appeals to the myth of restoration of lost power, so attractive to the English people. While their away from’s are very specific the Brexiteers towards arguments are very general.

The towards arguments of the stay camp are more specific. They want to basically keep things as they are, and people know more or less exactly what that is like. Nothing mythical about that. There are no advantages they can offer, that the UK doesn’t have already, being in the EU.

Proactive versus reactive
The leave camp is saying: ‘Let’s leave the EU and be great again’. The stay camp is saying: ‘Wait a minute, let’s first take a good look at all the the consequences this will have’. They are responding to the leave arguments. The leave arguments are setting the scene, framing the discussion. This makes the Brexiteers proactive and the remainers reactive, in the sense that they think about what the other side is saying.

While the stay camp takes a much more external locus of control position. They are saying: ‘We are part of bigger systems that we are dependent on. A lot of global developments are way outside of our control. And if we leave the EU, we’ll even lose whatever measure of control we have over that’.

We could dive into all of this more deeply, but I just want to mention one more observation and  then sum up the situation. The leave camp seems to have more kinesthetic arguments, based on gut feelings, pride, fear, irritation. While the stay camp sounds more visual. ‘If we look at the actual numbers’, ‘If we look at the global situation’.

When I sum up the meta programs, this is the picture: 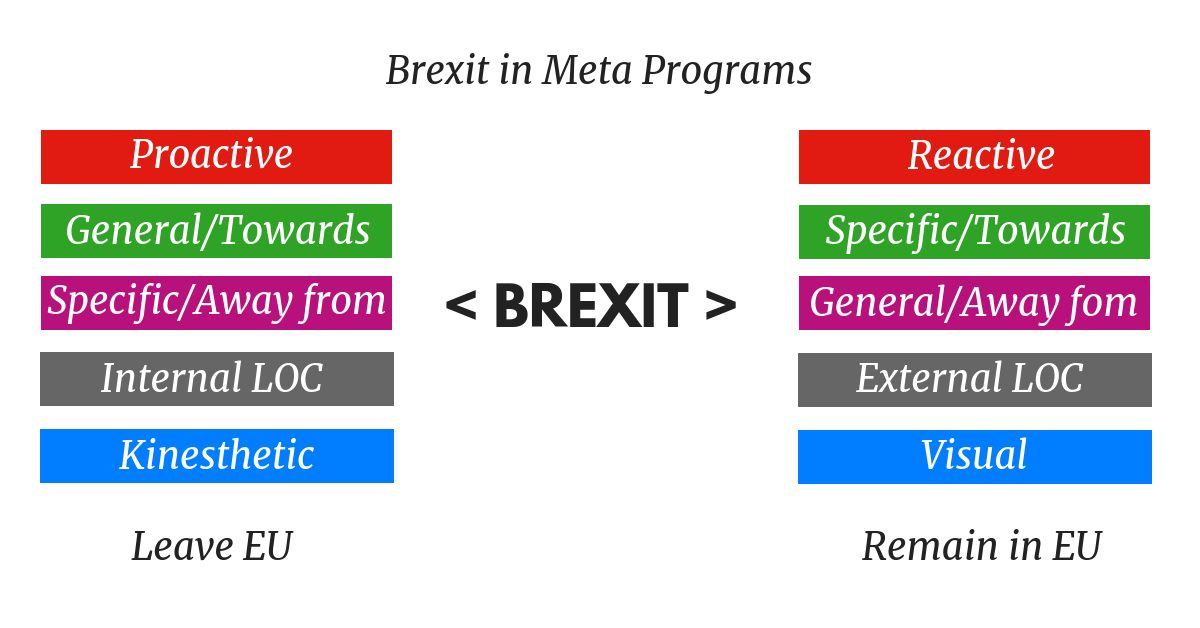 So why did the leave camp win the poll?

Overseeing these thinking style differences, it is actually surprising that the leave vote wasn’t even bigger…

Populist politicians
I guess the profile I sketched here, this combination of Graves drives and meta programs, is similar for most populist politicians. They claim to represent the common people and to fight the elites on the behalf of them. They are attracting large numbers of voters in most European countries. I am afraid that the more thoughtful, informed, global view will always be more difficult to ‘sell’. It takes a greater mental effort to even understand that position.

Now what?
So if we know this, then what? We can see the Brexit as one more example of populist politics. A familiar clash between right wing red/orange populists and left wing blue/green reasonable politicians. Psychologically speaking the populist are unfortunately holding the better cards. Which they have had up their sleeves ever since Hitler came to power in the thirties of the last century.

If you don’t like the populists, like me and most of my highly educated, cosmopolitan friends, how can you make use of this analysis? I believe that the voice of reason can be more influential than it has been recently. This voice may have  a tendency to speak in a reactive, specific, away from, visual manner, but this is no necessity. Reasonable arguments, even though they tend to be more complicated, can be presented in a proactive, general, towards and kinesthetic manner. I believe that reasonable politicians should model the populists in their thinking style and their presentation, if not their values. And understand that thinking style is not the same as thinking content. Meta programs are ways to express, handle and present your values. Blue/green values can be expressed in this format just as well.

Posted in:
Tagged with:

MindSonar is a new kind of psychological measurement.

It measures how people think (their NLP Meta Programs) and what they find important (their Graves Motivational Drives).

This, in turn, determines how they feel, what they notice, what they ignore and how the behave.

MindSonar is the first contextual measurement: it assumes that people will have different thinking styles in different situations, and that people can change they way they think.

MindSonar is used worldwide by consultants, trainers and coaches in many different organizations.
Back to Top